Rapper Takeoff Kirshnik Khari Ball Death – American rapper Takeoff is dead. According to reports, the well-known rapper passed away following a shooting in Houston, Texas overnight. According to reports, the Migos rapper’s death was announced on a social media page earlier today. It is not immediately known the exact time the rapper died. Confirmed sources say the rapper was shot and killed over a dice game in Houston a few hours ago.

The deadly shooting happened in the 1200block of Polk Street in the downtown side of Houston. At least a dozen law enforcement agencies responded to the scene of the incident. Arriving officers located two individuals suffering from multiple gunshot wounds at the scene. The two victims were transported to an area hospital where one was confirmed dead and the second in critical condition. The deceased victim was identified as American rapper Takeoff. Takeoff’s real name is Kirshnik Khari Ball. 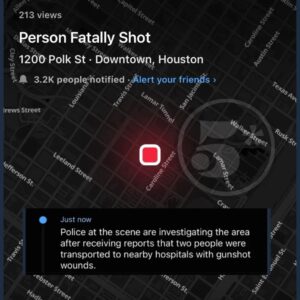 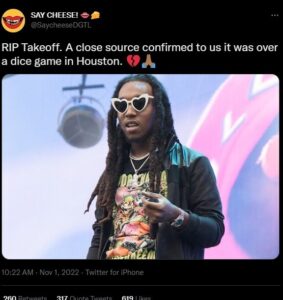 According to law enforcement agencies, the suspect fled the scene and is currently at large. A heavy police presence is currently in the area of the incident and everyone is been urged to avoid the scene at this time. The victim Takeoff along with fellow family members Quavo and Offset began rapping in 2008.

According to unconfirmed reports, rapper Quavo was also injured in the shooting that killed his brother, friend, and family Takeoff. Although the Houston Police Department is yet to confirm this claim, a confirmed source said Takeoff was shot multiple times over “Roll A Dice Game.’ The “Bad and Boujee” singer was pronounced dead at the hospital he was rushed to for medical attention. This is surely a hard time for their other partner and cousin Cardi B’s husband Offset.

Where and When was Takeoff Shot?

Who Was Rapper Takeoff?

At the time of this publication, there are no confirmed identifications released by the Houston Police Department, of the suspect wanted in connection to the fatal shooting of Lawrenceville born American rapper Takeoff. According to reports, the suspect fled the area in a vehicle. A heavy is police presence is currently in the area of the shooting for active investigations.

Migos first came to attention in 2013 when they released the single “Versace.” Drake remixed the song, which reached its highest position on the Billboard Hot 100 chart at number 99 and on the Hot R&B/Hip-Hop Songs chart at number 31. Their first studio album, Yung Rich Nation, came out in July 2015. Chris Brown and Young Thug were on it, and Zaytoven and Murda Beatz did the production. The highest the album got on the Billboard 200 chart was number 17.

Takeoff performing at the 2017 veld festival. “Bad and Boujee” with Lil Uzi Vert was Migos’s first number-one single in 2016. It peaked on the Billboard Hot 100 the week of January 21, 2017. The Recording Industry Association of America has now said that the song has sold four million copies (RIAA). Takeoff isn’t a part of the song or music video, but he can be seen in one of the background scenes.

Takeoff has said that he didn’t appear in the song because he was busy when it was being made. On June 24, 2017, when Complex’s Everyday Struggle was being filmed at the BET Awards, hosts Joe Budden and DJ Akademiks asked him about his absence. He said, “Does it look like I’m left off “Bad and Boujee”?” Takeoff’s answer made Budden leave the stage, and a fight almost broke out between Migos and Budden and their groups before security broke it up.

Takeoff Obituary and Funeral Arrangement will be announced by the family