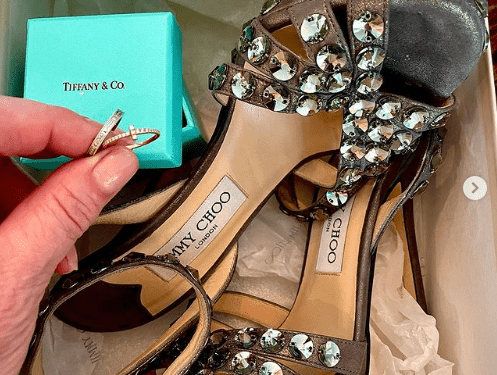 Good Riddance to Bed Memories – By selling the clothes she wore for her 2011 wedding to ex-husband Tom Vitale, Valerie Bertinelli is letting go of their ten-year marriage. The Hot in Cleveland actress shared some of the items she had posted on the online luxury marketplace The RealReal on Wednesday. The 62-year-old actress captioned photos of two Tiffany diamond rings and a pair of Jimmy Choo heels she wore to her 2011 wedding to Vitale with, “Dropped a few things off with @therealreal.”

“A couple of Tiffany rings that have some bad memories attached and a pair of shoes I wore to a wedding in January 2011,” she wrote and added a winky face emoji. “They should be up in a couple of weeks!” In the comments area of her post, friends and admirers showed their support, and her son Wolfgang Van Halen, whom she shares with the late rocker Eddie Van Halen, also left some kind words.

“Love you, Ma,” the musician wrote, alongside three red heart emojis. “It’s a good thing to let things go,” another fan commented. “I say after you give those away, do something that makes you happy – cut some flowers from your garden & place them in a vase, take a walk on the beach, and lastly make your favorite meal & have a great glass of wine.”

Another Topic:  A$AP Rocky celebrated his 34th birthday with his girlfriend Rihanna in all-black outfits

“It’s not always easy but cleaning house, metaphorical and physical, can be both emotionally cleansing and freeing,” said someone else. After formally separating from Tom Vitale in November 2021, Valerie Bertinelli filed for divorce from him in May. Bertinelli recently advertised her Los Angeles house for $2.5 million along with the mementos.

The Food Network host decided to sell the items as she and her ex are engaged in a contentious divorce battle over spousal support arrangements. Their 2010 prenuptial agreement is currently being contested by the financial planner. According to court records acquired by PEOPLE, Vitale requested spousal support from Bertinelli and requested that the actress refrains from doing the same.

When Bertinelli appeared on the Today show in June, she told host Hoda Kotb that she was content on her own after her divorce. “I am gonna be more than happy to be happily divorced and spend the rest of my life alone, I’ll be happy that way. Well, with my six cats and my dog and my son, and hopefully one day grandchildren,” Bertinelli admitted. “Because of the challenges that I’m going through right now because divorce sucks. I can’t imagine ever trusting anyone again to let me into my life. So I have some trust issues that I’m sure I’m going to have to get past.”

Before divorcing in 2007, Valerie Bertinelli was previously married to rock legend Eddie Van Halen for more than 25 years. Wolfgang, their son, is 31 years old. In her 2022 memoir, Enough Already: Learning to Love the Way I Am Today, Bertinelli paid a moving obituary to her ex-husband upon his death from cancer in October 2020.