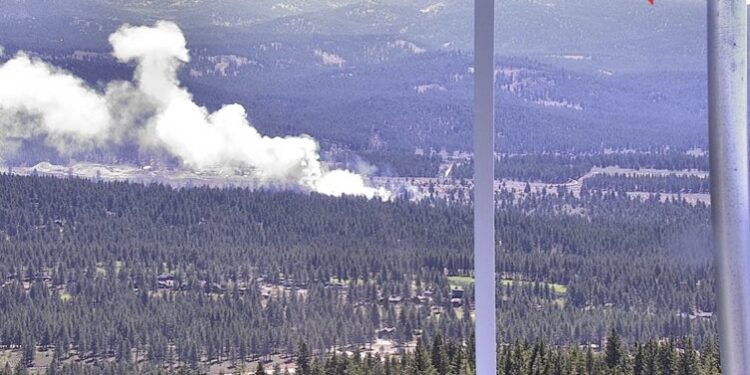 Multiple crews are on the scene of a large smoky wildfire in Truckee, California today July 7th, 2022. According to the Truckee Police Department, an evacuation order has been issued by officials following the wildfire. According to the officials, the fire is reported in the Joerger and Butterfield Drive, down by Truckee River.

According to the Truckee Police Department, thick clouds of smoke can be seen emanating from the fire. According to officials, an evacuation order has been issued for the zones TPD-E112. The fire is reportedly on Nevada Co or the border of Nevada and Placer counties.

Another Topic:  Putin Scrambles To Reorganize His Forces Following The Death Of A Russian Colonel In Ukraine

4:48 p.m. The 12-acre wildfire that forced evacuations near Truckee on Thursday afternoon has been contained, police said. Truckee Police Department officials stated they had arrested a lady after an investigation with Cal Fire employees found evidence linking her to the starting of many spot fires that eventually spread to span 12 acres. The guy, the police say, confessed to deliberately starting the fires.

The department said Thursday on Instagram that she was arrested and facing multiple arson charges. Her identity is being kept secret while the police continue their inquiry. Time: 2:43 pm, July 7. At 2:13 p.m., the Truckee Fire Protection District reported that the Butterfield Fire was contained at 12 acres.

This includes the TRK-E112 area northeast of Truckee Airport. On Thursday afternoon, a wildfire started in the dry brush near Truckee, a Sierra-Nevada mountain town 180 miles northeast of San Francisco. Just after noon, the Truckee Fire Protection District reported that the Butterfield Fire had burned between 5 and 10 acres near Butterfield Drive. The fire is endangering residential areas and commercial establishments in the area where Placer and Nevada counties meet.

People living in the TRK-E112 were told to leave their homes by the Truckee Police Department. The government agency ordered an immediate evacuation.