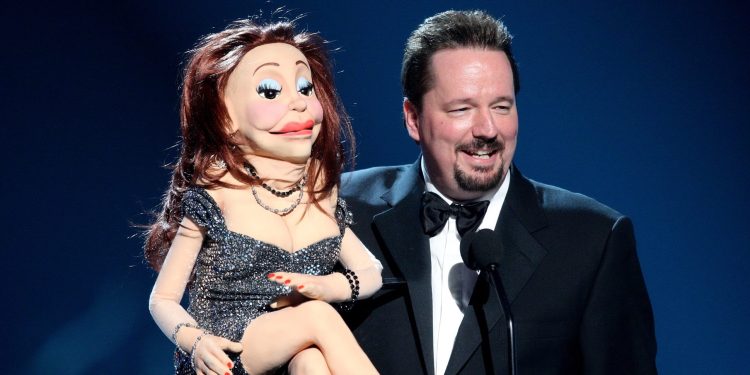 Terry Wayne Fator was born in Dallas, Texas, on June 10, 1965. He is well known for his incredible ventriloquist and singing skills, which he initially demonstrated on the TV show “America’s Got Talent” in 2006, which he later won. Since his breakthrough in 2006, he has continued to dazzle audiences with his abilities as a comic and impressionist.

Have you ever wondered what Terry Fator’s net worth is? Terry Fator’s overall net worth is reported to be $100 million, according to sources, an amount acquired by his ventriloquist puppet kingdom comprising 16 different characters featured in his show.

Terry was raised in a family of three siblings and has performed shows for his entire family since he was a toddler. He discovered a book named “Ventriloquism For Fun And Profit” by Paul Winchell in fifth grade, became increasingly intrigued in it, purchased his first ventriloquist dummy, and soon won his first prize, winning $25 at a church picnic.

Terry was a member of a couple cover bands before starting his professional ventriloquist career, although he didn’t have much success. His big break came in 2007, when he featured on the TV show “America’s Got Talent.” Fator’s abilities astounded the judges, which included David Hasselhoff, Piers Morgan, and Sharon Osbourne, and he eventually won the finale and a $1 million reward. His career, as well as his entire net worth, has risen steadily as a result of his achievement.

His biggest deal to date is a partnership with the Hotel Mirage in Las Vegas, where he inked a $100 million contract to perform every night from May 2008 to 2013. Fator has also made several live appearances in theaters, as well as several guest appearances on “America’s Got Talent,” the show that launched his fame.

Walter T. Airedale, a country singer; Winston The Impersonating Turtle, a frog inspired by Kermit The Frog; singing Louis Armstrong’s songs; Maynard Tompkins, who impersonates Elvis Presley; Duggie Scott Walker, a heavy metal singer impersonating ACDC; and Lynard Skynyrd are just a few of his amusing characters. He has a large cast of characters since he is always adding new puppets to his kingdom.

He also published a book titled “Who’s the Dummy Now” in 2008, which added to his net worth. Terry Fator’s philanthropic efforts has also been recognized. He is a supporter of the “Ronald McDonald House of Charities,” an organization dedicated to improving children’s overall health.

In addition, he has performed for a variety of charities over the years, including a 2007 show in Kalispell, Montana, at the Kidsports Sports Complex, for the families of miners in Huntington, Utah, and a 2008 show at the Palace Theatre in Corsicana, Texas, for the Navarro Council Of The Arts and the Mildred Drama Club. Fator has been married three times, the first to Melinda (1991-2010), the second to Taylor Makakoa(2010-2015), and the third to Angie Fiore (2015).