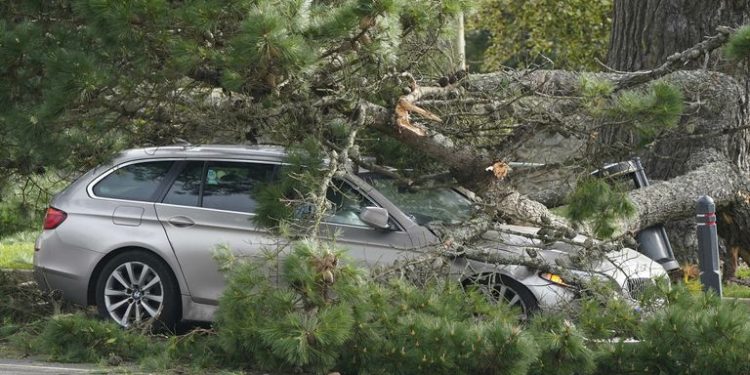 Nothing less than four persons have died as a result of havoc wrecked through communities in United Kingdom and Ireland by Storm Eunice.

According to Dailymail, Billy Kinsella, 59, was cleaning debris from a road near his home in Co Wexford, Ireland, when he was crushed by a falling tree during yesterday’s carnage.

Billy who was an employee of Wexford County Council was at the scene of another fallen tree in Ballythomas, trying to clear off the debris when he was fatally injured.

Fionntan O Suilleabhain, a Sinn Fein councillor who grew up with Mr Kinsella’s family and lives close by, was among those who paid tribute.

Fianna Fail councillor Donal Kenny said: ‘I knew Billy quite well. He was a nice easy-going fella and was one of those lads who got on with his day’s work. He was out doing his job to keep the roads clear. It is very difficult for his family.’

Other victims of Storm Eunice Tragic Accident were reported on Dailymail.

According to the website, the Metropolitan Police said a woman in her 30s died after a tree fell on her car in Haringey, north London, on Friday afternoon. After debris impacted the windscreen of a vehicle he was driving in Netherton, Merseyside, a man in his 50s died.

Another Topic:  Two days after losing the election, Bolsonaro agrees to transition

A Mercedes-Benz Sprinter pick-up collided with a tree in Old Odiham Road just before midday in Alton, Hampshire, killing another guy in his twenties. After being struck by debris from a roof in Henley-on-Thames, a member of the public received “severe injuries.” Two males were sent to the hospital after separate events in south London.