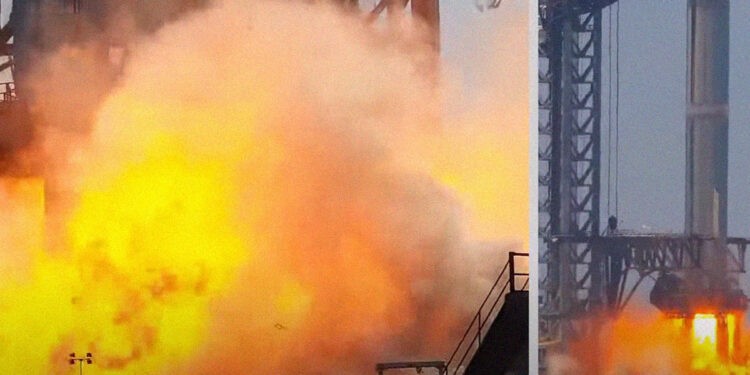 Starship SpaceX Explosion – Starship SpaceX explosion happened on Monday at approximately 4:20 p.m. at the Elon Musk’s launch facility in Texas, near the base of a test rocket booster. Musk responded to an inquiry about the incident by tweeting that it took place during afternoon testing.

Initial reports indicated that nobody was hurt. In his goal to send humans to Mars, Elon Musk had planned to employ enormous rocket boosters to launch his spaceship space vehicles into orbit. Due to Musk’s emphasis on rapid development and testing as the best way to reach his ambitious goals, several previous tests of vehicles in the Starship program have also resulted in fireballs.

Since 2010, SpaceX has successfully flown cargo and astronauts to the International Space Station using their smaller Falcon rockets, which are unrelated to the starship program. These rockets are also used by SpaceX to launch the company’s Starlink communication satellites, which will make global internet access a reality.

Another Topic:  A sample of the Nubia Z40 Pro's camera revealed by a business executive ahead of its introduction.
ADVERTISEMENT

SpaceX, an American aerospace company, is currently developing Starship, a reusable, super-heavy-lift launch vehicle. The launch vehicle is the highest and most powerful of its kind. [1] Spacecraft Starship is the second stage of a two-stage launch vehicle that includes the Super Heavy booster stage. It can carry freight, passengers, fuel, or land on the moon.

After a vertical landing, both Starship stages can be quickly reused. Both are propelled by Raptor engines and use a mixture of liquid oxygen and liquid methane as their propellant. The mass that can be transported to low Earth orbit by the starship is 100 t (220,000 lb). When the spacecraft reached orbit, Starship tankers might refuel it and take it to a higher orbit or somewhere else in the inner Solar System.

Another Topic:  In South Africa, Samsung will release the Galaxy S22, which will use a Snapdragon processor.

The spacecraft can then either enter the planet’s atmosphere and land retropropulsively using its engines or be abandoned in space, depending on the objective of the mission. As of July 2022, the building is underway on Starship launch sites at Starbase in Texas, Kennedy Space Center in Florida, and two offshore platforms.

The rocket’s decreased launch cost and greater launch frequency make them the ideal launching point for a wide variety of planned space missions. Starship’s primary missions in the near future will be satellite and probe deployment, support for commercial astronauts, and lunar exploration via the Artemis program. The rocket has the potential to speed up transportation between Earth’s spaceports and aid SpaceX in its goal of populating Mars- Wikipedia.