Residents observe an hour of silence to remember the victims of gun violence.

As everyone sat down together, that was the general consensus among those in the community. Learn more 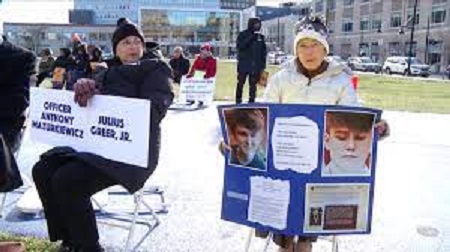 Residents mourn – Members of the Rochester community have expressed their exhaustion with the recent spate of violence and have demanded an end to it all. On Monday, members of the community came together for Shiva at Parcel Five in the downtown area of Rochester. They observed one hour of complete silence in memory of those who had passed away. The Jewish custom of sitting Shiva, for seven days after the death of a family member is a time of mourning and reflection. The bereaved person’s loved ones and friends would typically pay them visits to ensure that no one mourns alone. As everyone sat down together, that was the general consensus among those in the community.

Monica Gebell, who is the director of community relations at the Jewish Federation of Rochester, made the following statement: “Whether or not you think that gun violence affects you, it does.” “We are all human beings, and as such, we all have families consisting of brothers and sisters, sons and daughters, and parents. We are a unified group, and each of us is a native of Rochester. We are each other’s support system.” People walked around with signs bearing the names of those who had been killed by firearms, and many of them were commemorating loved ones who had been killed in shootings in the city during the past year.

On Thursday, December 14, 2017, at 9:35 a.m., there will be a moment of silence held virtually in honor of those who have lost their lives as a result of gun violence. Even though this day marks the fifth anniversary of the school shooting in Newtown, Connecticut, which took the lives of 20 children and six adult staff members at Sandy Hook Elementary School, the moment of silence is an opportunity to remember all of those who have passed away as a result of deaths caused by gun-related incidents.

Another Topic:  Russian's Nuclear Forces On Alert For Activation

As a virtual event, the moment of silence is inclusive to people of all faiths and is non-partisan. It can be observed anywhere. The Jewish Community Relations Council of Greater Hartford’s Facebook page will be updated with actionable suggestions in the near future. You can participate in the event that is being held on Facebook by going to bit.ly/MomentofSilence.