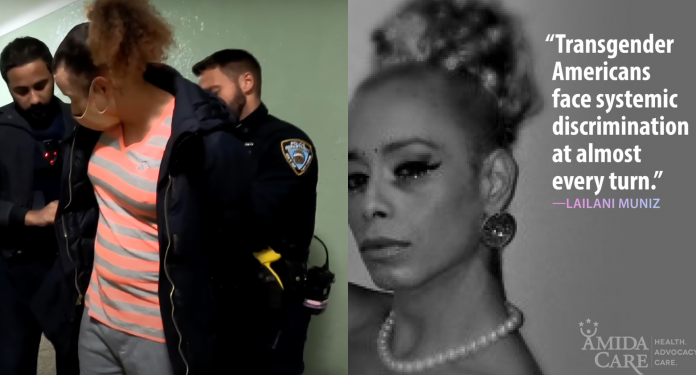 A trans rights and HIV activist was arrested in New York City this month for allegedly trying to molest a 14-year-old. Fred Medina of NY Creeps Spotlight caught Lailani Muniz, 39, in a predator sting to expose child abusers. Muniz is a well-known trans rights and HIV activist in the city. EDGE Network, an online homosexual news organization, profiled Muniz in December 2021 for his work with the New York HIV Planning Board. Muniz appeared in a VICE HIV/AIDS documentary last year.

According to REDUXX, Muniz, who is HIV positive, was a spokeswoman for Amida Care, a New York nonprofit health insurance agency that serves “those living with HIV/AIDS, people suffering homelessness, and transgender people.” Muniz was also a member of the ‘HIV Stops With Me’ campaign. In addition to his HIV campaigning, Muniz was a trans rights activist.

Another Topic:  Purdue student Adonis Tuggle cries for help while being aggressively arrested by officer

“I can’t front, I am nervous … I watch too much TV [since] I know you’re young, it reminds me of that show To Catch a Predator where they set individuals up attracted to minors.” In another picture, Muniz sends “Josh” a snapshot of himself with what seems to be an erection.

Bronx Times reports that Muniz met “Josh” in Bedford Park on October 20 and encouraged him to carry a condom. Medina notified police to Muniz’s whereabouts. NY Creeps Spotlight posted their sting video on October 27, spanning 20 minutes with Muniz. In the video, Medina asks Muniz why he came to the meet-up location and identifies himself as “Joshua.” Muniz initially denies Medina’s claims about the meet-intended up’s purpose, saying he promised “Josh” he wouldn’t have sex with him due to his age. Medina refutes Muniz’s claim by showing him Grindr chat logs.

After being identified as a transgender activist, Muniz denies being a spokesperson for transgender people and denies doing anything illegal. Medina chases him as he flees. When Medina calls the police, Muniz speeds up to escape. Medina shows NYPD the chat logs when NYPD arrives. Muniz is apprehended. Muniz was released on his own recognizance after being charged with attempted sexual abuse, misbehavior, and child endangerment. His court date is Dec. 2.

Muniz isn’t the only transgender activist imprisoned this year on child abuse accusations. Reduxx revealed in May that a migrant trans activist whose story of gender identity persecution was covered in The New York Times was facing over a dozen felony charges connected to sexual assault and extortion of a minor kid. Carlos Arturo Aparicio Hernandez, 36, was charged with aggravated sexual extortion, six charges of forcible sodomy, three acts of forcible sexual abuse, enticing a minor, and five counts of sexual exploitation of a minor. Hernandez is being held as a “female” inmate in Salt Lake County Prison.