Smoke, blaze behind Balmoral Hotel prompts evacuations in the area 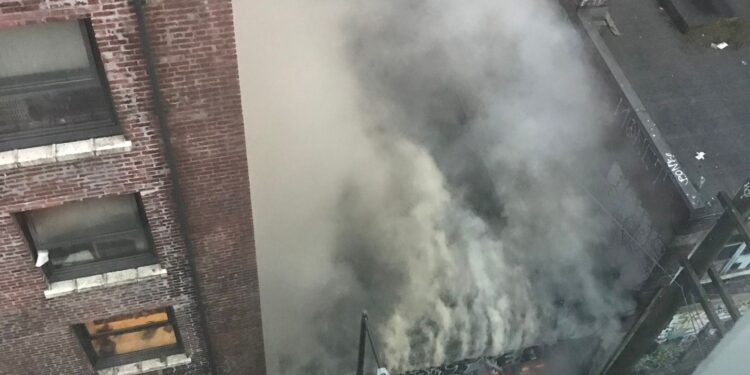 A major blaze is currently blazing in the community known as Downtown Eastside on the 6th of July 2022, according to the Vancouver Fire Rescue Services, particularly close to the intersection of East Hastings Street and Main Street.

There are reports that more than a dozen fire teams and many fire engines have arrived at the scene of a double building fire that is now occurring in Vancouver. According to the officials, a fire is currently taking place at a facility that is located directly behind the Balmoral Hotel, and the blaze has spread over the entire building. The fire immediately spread to a structure that was located nearby, which necessitated the prompt evacuation of the surrounding neighborhood and the participation of a large number of fire companies.

The various law enforcement authorities in Vancouver will be conducting an investigation to determine what started the fire. In a tweet that she sent out, Fire Chief Karen Fry stated that “firefighters (are) working hard to safeguard the residential building next door.” About ten fire trucks have arrived at the scene of the incident, which is taking place close to the Balmoral Hotel. They are currently working to put out the fire.

Downtown Vancouver – A neighborhood known as the Downtown Eastside can be found in the city of Vancouver, which is found in the province of British Columbia, Canada. The Downtown Eastside (DTES), which is one of the city’s oldest neighborhoods, is the site of a complex mix of socioeconomic challenges, including disproportionately high levels of drug use, homelessness, poverty, violence, mental illness, and sex work. The DTES is also the scene of a complex mix of environmental challenges, including a lack of green space. The all of these challenges can be found in just this one location.