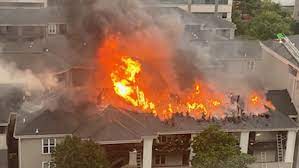 Multiple crews are working at a two-alarm apartment fire in Arlington. The incident was reported in the area of 100 block of Circles Drive. according to the DFW Scanner, 3 fire engines and about 9trucks are at the scene of the fire. Multiple crews with the Arlington fire is also on the scene battling the inferno, a possible cause of the fire is currently under investigation. This fire comes after about few hours crews responded to a an apartment fire on the 2600 block of W. Randol Mill Road. Fire fighters say the blaze prompted a heavy dark clouds of smokes in the neighborhood.

Arlington is a city in the state of Texas, located west of Dallas. The University of Texas at Arlington (UTA), which has a contemporary planetarium on campus, is located here. Trails cut through a hardwood forest rich in wildlife in River Legacy Parks. The River Legacy Living Science Center, which includes aquariums, terrariums, and interactive exhibits, is also located within the park. AT&T Stadium is home to the Dallas Cowboys football team and also holds concerts- Wikipedia.

SHARES
ShareTweet
Another Topic:  10 year old arrested in Florida, Police identifies the fifth-grader as Daniel Issac Marquez
If you find errors in this report or any concern, reach out to us through Contact Us Thanks