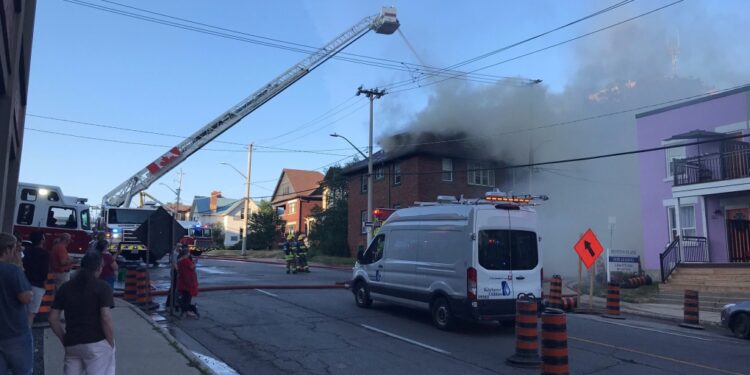 Kitchener Fire Today – According to a tweet by the Waterloo Regional Police, a fire in Downtown Kitchener has caused traffic closures and a power outage. The Kitchener Fire Department is responding to the incident.

On the corner of Benton Street and St. George Street, there is a fire being fought by crews. Ten or so fire trucks were dispatched to the area. According to the Waterloo Regional Police, St. George Street is closed between Benton Street and Cedar Street South, while Queen Street is closed between Courtland Avenue and Church Street.

Another Topic:  Water reaction, not a miracle, in County Mayo church, Priest says

1,350 consumers were impacted by an outage in the area, according to Kitchener Wilmot Hydro. The problem began at 7:45. The hydro map indicated a projected restoration time of 10:45 p.m. as of 8 p.m.

What causes the fire is yet to be known at this time as no further information have been released. This is a developing story. More information will be updated when it is available.

Another Topic:  Gena Tew, Instagram model nearly died from AIDS
SHARES
ShareTweet
If you find errors in this report or any concern, reach out to us through Contact Us Thanks