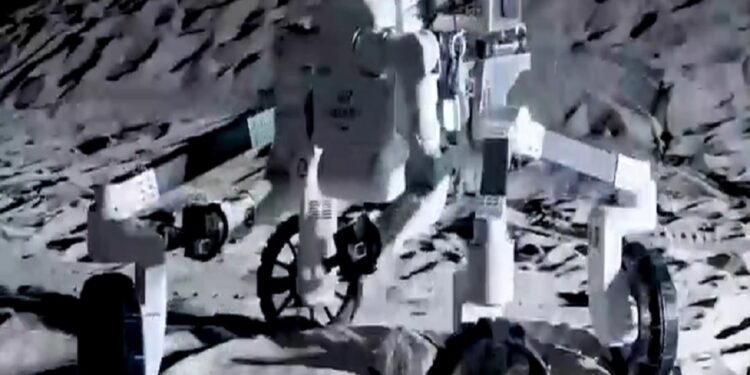 The lunar rover that was called R1 was created by a Japanese company. R1 was a four-legged, rolling robot that resembles a centaur, with two arms with claw-like hands, an arachnid-esque abdomen, and two bulging cameras for eyes, and is designed to traverse the moon’s surface. It was built and designed by GITAI  in collaboration with the Japanese space agency, JAXA. A recent test run at a JAXA facility that simulates lunar dirt shows the robot roving around on four wheels, unpacking a series of parts with clamp-like hands, and cinching together the base structure for a solar panel.

The robot also went through a few more exercises to see how well it can traverse bumpy terrain, hills, and potentially collect a sample of lunar regolith. The video, which has been sped up to 15x normal speed, shows the robot using its pincher hands to pick up a small scoop and a clear jar and jerkily harvest a small amount of simulated moon dust. The R1 is one of several robots developed by GITAI for various purposes. According to the company’s website, the company’s goal is to take its technology to the actual lunar surface sometime in the mid-2020s.

GITAI is a space robotics startup that creates robots capable of performing tasks in all areas of space development, as well as reducing costs for operations on the Moon and Mars and the construction of space colonies. GITAI’s goal is to provide highly capable, safe, and dependable robots to assist in the construction and maintenance of satellites, lunar colonies, and even Mars cities. GITAI is bringing together the world’s best talents to make this dream a reality. GITAI was established with the goal of disrupting the growing demand for space construction and maintenance by producing more capable and less expensive robotic technologies.

Another Topic:  Starship SpaceX Explosion today: Fiery Explosion, fireballs Hits Elon Musk Mars Rocket Test
SHARES
ShareTweet
If you find errors in this report or any concern, reach out to us through Contact Us Thanks