Huntsville HS football player of the week poll for Week 11 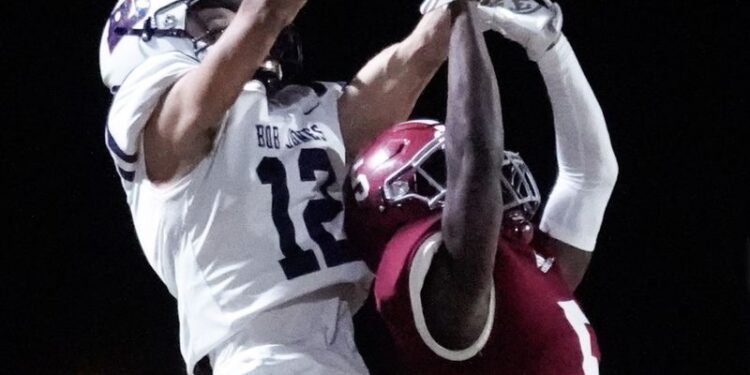 Check out this week’s candidates for the football player of the week award for the Huntsville region, and then cast your vote in the poll that follows. On the night of a game, coaches and statisticians can send game reports to [email protected] to be considered for a player of the week nomination. The polls will remain open until the wee hours of Wednesday morning.

According to al on Thursday, the identity of the winner will be revealed on AL.com. After you have made your selection, you must not forget to click the “finish survey” option.

Candidates for the 11th week are as follows:

During Fort Payne’s victory over Cherokee County by a score of 35-16, Bennett Blanks contributed to the victory by rushing for two touchdowns, catching a touchdown pass for 17 yards, and making 10 tackles, including one sack and another for a loss. In a victory over Westminster Christian by a score of 49-14, Madison Academy’s Ken Cherry rushed for 166 yards and scored four touchdowns.

Another Topic:  In Tuesday's game against Newcastle, Yerry Mina was substituted before halftime

During East Limestone’s victory over Mae Jemison, Xavier Edwards ran the ball eight times for 176 yards and three touchdowns. The final score was 45-6. Carlin Long, of Huntsville, carried the ball 17 times for a total of 183 yards and four touchdowns in his team’s 63-7 victory over Hazel Green.

Another Topic:  The NFL and Senior Bowl recently hosted the inaugural HBCU combine

During Randolph’s victory over Fairview by a score of 34-14, Nic Strong of Randolph caught 11 passes for 155 yards and two scores. He also ran for 61 yards and a touchdown on six runs. Toni Townsend of West Morgan led his team to a 55-38 victory over Haleyville by scoring two touchdowns on the ground and blocking a punt.

Isaiah Warnick, who plays for Falkville, had two interceptions and caught four receptions for 73 yards and a touchdown in their victory over Winston County, which was by a score of 30-20.