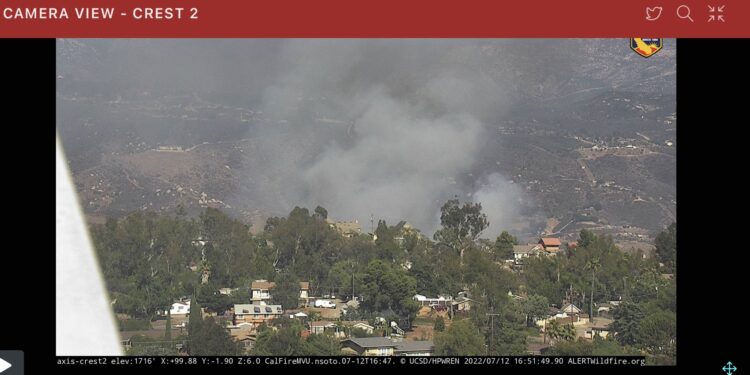 Harbison Canyon Fire – On the afternoon of Tuesday, July 12, 2022, multiple teams from the San Diego Fire Department and the San Diego Police Department responded to a grass fire that had spread over 5 acres at 1900 Harbison Canyon Road in Unincorporated El Cajon. The San Diego Sheriff’s Office reports that deputies are actively evacuating the neighborhood around Sycuan Oaks Drive due to the ongoing fire.

Even more, people had to leave their homes because of the 5-acre fire, and it included the communities of Vista De La Montana and Los Caballos Ln. Officials indicate that zero percent of the fire has been contained, prompting the need for air support. About an hour later, it was reported that the Harbison Fire near Dehesa had burned through 20 acres of vegetation, destroying two structures and threatening several others. At 5:35 pm, a request was made for three more tankers, bringing the total number of tankers to the site to six.

WATCH COMMANDER: @SDSORSD Deputies are assisting the fire department with a small brush fire in the area of 1900 Harbison Canyon Road, in Unincorporated El Cajon. Deputies are evacuating the area of Sycuan Oaks Drive. Per FD, no other evacuations at this time.

Another Topic:  Entrapped resident rescued from High Fire in Revere, Massachusetts by Police

It has been reported that the fire on Harbison Canyon Road has been contained at 20 acres, which is according to the San Diego Fire Department. At the scene, there were a total of three airplanes, five kinds 3 vehicles, and a significant number of firefighters. Fire has forced the closure of Harbison Canyon Road between Dehesa Rd and Crest Blvd.

On Thursday morning, authorities in San Diego are investigating what they believe to be two arson fires in the city’s southeast. The fires occurred within a quarter of a mile of each other.
Nobody was hurt, and no buildings were destroyed. Around 4:20 a.m., a fire was spotted in a canyon behind several houses on Hilltop Drive, not far from Hal Street in Chollas View.

According to San Diego police Sergeant Rick Pechin, a spokeswoman for the Metro Arson Strike Team, the fire destroyed about a third of an acre of bush and caused around $100 in damage to a fence. While putting out the first fire, news came in of another incident about a quarter-mile east of Euclid Avenue in Emerald Hills. That one burnt a patch of the hillside about 30 by 30 feet in size off Elwood Avenue, close to Geneva Avenue. There are no eyewitnesses and it seems both fires were intentionally started. Pechin wrote in an email, “There was evidence of homeless activity in both of these areas.”