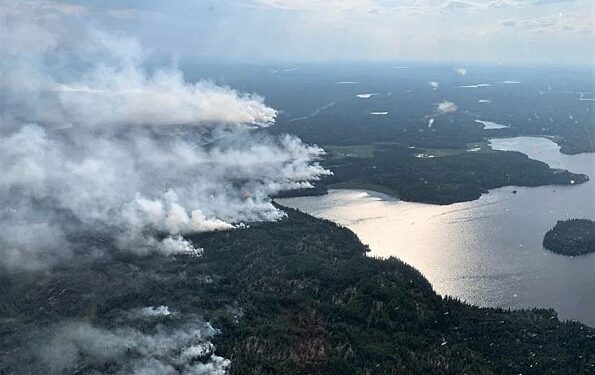 Fort Chipewyan Fire – Although the overall level of wildfire hazard in the Fort McMurray Forest Area is judged to be very high, a burn ban has been imposed in the region north of Lake Athabasca due to the extremely high fire danger there.

According to reports, there are currently six wildfires burning in the area, all of which were started by lightning and are all thought to be contained. Alberta Wildfire is letting the majority of the fires burn naturally under the cautious eye of seasoned fire management since they are in isolated locations and do not provide a threat to towns or resources. A notable wildfire in the region has been identified as MWF031.

Another Topic:  A wrongful death lawsuit was filed to WCDC inmate who passed away in September

The report also stated that the fire is situated on the shore of Flett Lake, over 10,000 acres in area, and about 21 km north of Fort Chipewyan. The fire’s growth hasn’t gone south, and as a result, it hasn’t gotten any closer to the airport. 32 firefighters in total, stationed in the neighborhood of Fort Chipewyan, are assigned to wildfire MWF031, along with five helicopters. According to Alberta Wildfire, Fort McMurray has extra planes ready if necessary.

Those who live there might have symptoms including worsening coughing, sore throats, headaches, or shortness of breath. Poor air quality and decreased vision are being brought on by wildfire smoke, with varying degrees of severity from hour to hour. It is anticipated that the smoke will continue to linger to the north of Fort Chipewyan.

The region north of Lake Athabasca is still under a fire prohibition. Wood campfires are not permitted on public, private, or provincial campgrounds. All active fire licenses are suspended. Fire pits in the backyard, charcoal barbecues, pyrotechnics, and explosive targets are also not allowed.