David Mecum dies after vehicle accident on I-80

David Mecum (age 53) of Spring Creek has passed away after a vehicle crash on Interstate 80 near state mile marker 165 (county mile marker 1 in Humboldt County) on Friday night. 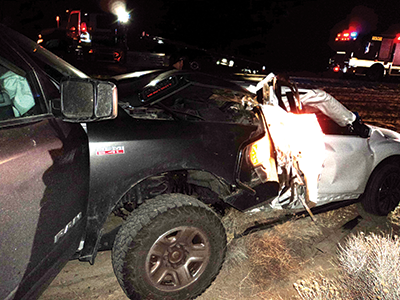 David Mecum Death –  David Mecum (age 53) of Spring Creek has passed away after a vehicle crash on Interstate 80 near state mile marker 165 (county mile marker 1 in Humboldt County) on Friday night. According to the report of the accident,  that the Nevada State Police, Highway Patrol Division, responded to a complaint of a vehicle collision on Interstate 80 close to state mile marker 165 on November 4, 2022, at around 8:30 p.m. Pacific Time. The accident included many vehicles (county mile marker 1 in Humboldt County) approximately 20 kilometers (13 miles) to the west of Winnemucca.

How did the accident happen?

According to the results of the preliminary investigation, it was discovered that a white Nissan hatchback was parked in the right travel lane of the eastbound direction of Interstate 80; however, none of the vehicle’s lights were on. This information was based on the findings of the preliminary investigation. The right travel lane on the eastbound side of Interstate 80 was occupied by a gray Ram pick-up truck that was travelling in the direction of the Nissan.

Following the collision that took place between the front of the Ram and the back of the Nissan, both vehicles entered the center median of the road after veering off the left side of the roadway. Both cars ended up skidding out of control as a result of this. Unfortunately, the man who was driving the Nissan, a Spring Creek resident by the name of David Mecum who was 53 years old, did not make it through his injuries and was pronounced dead at the scene of the collision.

Speaking on the details of the accident, the driver of the Ram was given medical assistance at the scene of the accident, and then they took him away in a vehicle afterward. As part of their investigation, agents from the Nevada Highway Patrol Northern Command East Multi-Disciplinary Investigation and Reconstruction Team are currently examining the wreckage of the vehicle involved in the crash (M.I.R.T.).

Please call the Elko Office of the NHP at 775-753- if you witnessed what took place or if you have any information regarding the collision.