Just 9 hours after the deadly mass shooting at Club Q, Chaya Raichik is bragging about inciting the attack. Her tweet has now raised multiple reactions from individuals who feel that she should be held accountable. She knows she’ll get away with it. The last time she posted about Colorado was weeks ago. This is not a coincidence but open gloating that she’ll never face accountability for her actions. This club had a drag show every Saturday. It’s impossible to escape the horrifying conclusion that the escalating rhetoric against drag queens promoted by people like Chaya Raichik (libsoftiktok), Matt Walsh, and others created the environment where someone would do this. 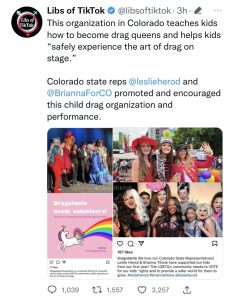 Matt Walsh, Jordan Peterson, and especially Chaya Raichik are directly responsible for this tragedy The club in Colorado Springs where at least 5 people were murdered was scheduled to host a drag brunch this morning. Chaya Raichik is currently targeting state legislators on her harassment account as she celebrates the return of bigots to Twitter. chaya raichik, owner of libsoftiktok, is easily responsible for dozens if not hundreds of LGBTQ deaths at this point, and Elon Musk just a week ago left them a positive reply. how much longer is she, a terrorist, going to be allowed to have a platform

Who Is Chaya Raichik?

The right-wing Twitter account known as Libs of TikTok is owned by Chaya Raichik, a former real estate agent. The account reposts content generated by liberals, leftists, and LGBT individuals on TikTok and on other social media platforms, frequently adding hostile, sarcastic, or disparaging commentary. As of September 2022, the account, which is also known by the handle @libsoftiktok, has over 1.4 million followers and has emerged as a significant voice among political right-wingers and conservatives in the United States.

Raichik claims that she is the only person who works on the account and that she resides in Los Angeles. TikTok has taken numerous different measures, including temporary and permanent suspensions, to restrict access to the social network accounts belonging to Libs of TikTok. It’s been said that this account encourages harassment and criticism of teachers, medical personnel, and children’s hospitals, as well as propagating false allegations and harsh speech towards underrepresented groups.

People who identify as LGBT, those who promote LGBT kids, and those who instruct minors about sexuality are referred to as “groomers” in Libs of TikTok’s derogatory definition of the term. According to the account’s followers and supporters, the account does nothing more than reposting previously published content displaying “sex and gender ideology.”