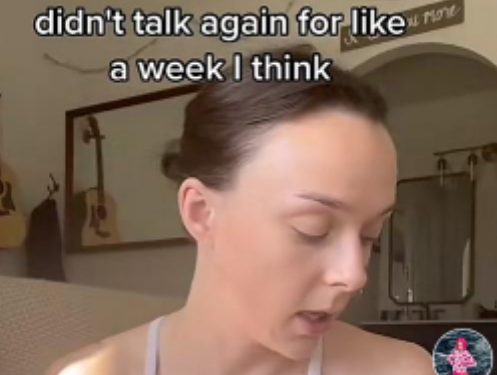 Fans of pupolar TikToker are at raged after her husband remarries just six-moths after painful death. According to reports, internet celebrity Brooke Sevierr died following complications during childbirth, her husband Steven Sevierr has reportedly remarried to a woman identified as Shelby. The marriage news is coming si months after his wife Brooke died in what fans regard as the most heartbreaking way for a woman to have died. Brooke was pronounced dead at the labour room following complications during childbirth.

According to unconfirmed reports, a fake GoFundMe account was opened for Brokke Sevierr after the news of her death went viral. Her family has since refused to confirm if the GoFundMe page was authentic. Many fans has reacted to the viral news of Steven remarrying, was many feels angered as the new wife Shelby refers to Brook’s daughter as “Our mother’s daughter,” according to reports. Steven and Brooke got married in 2019, in 2022, Brooke became pregnant with their daughter. She died during the birth of their daughter.

Shelby Sevierr wrote on TikTok; Imagine dying during childbirth and your husband moves extremely fast and his new wife refers to you as “our daughter’s mother” and continues to call your baby her baby and uses your death as a sob story and then realizing your husband is allowing her to say these things. “This is Brooke, the mother of our daughter… She was with Steve for 4 years before she died while giving birth… This is Savannah, our daughter… This is me when I met her for the first time… While Daddy worked, we were always together… While his wife was sick, he learned how to be the best father. Even though there was a lot going on around us, we fell in love pretty quickly… I could not stop thinking about them… I caught the bouquet at my best friend’s wedding, and we became a family.”

The following pictures show Shelby and Steve getting married and having children. All of this seems fine and normal, but the timeline is very strange. In the picture, Savannah is only about six weeks old when Shelby meets her for the first time. This means that Shelby came into their lives just six weeks after Brooke died. People in the comments are obviously thinking the same things.