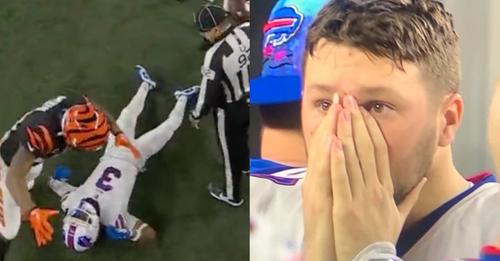 At least a dozen medical personnel’s are responding to an incident this night in Cincy after Bills player Damar Hamlin suddenly collapsed on the field. Crews are currently working on him as players stand around crying and praying and hoping for good news. Damar Hamlin is feared dead after he fell, and slumped a second time while players run around in confusion. Multiple medical personnel arrived and were seen performing a CPR on the player.

No movements were detected in the first few minutes of the CPR administration. Although fans fear the player may have died, many are still hoping that a miracle happens real soon.

Scary scene. An injured Damar Hamlin finished a play, then collapsed to the turf, prompting #Bills athletic trainers to rush out to tend to him. The entire Buffalo sideline is out on the field as the ambulance has made its way to Hamlin. Bills players are beside themselves. They are giving Hamlin CPR on the field

After a catch, Hamlin ran into Bengals receiver Tee Higgins. He stood up and seemed to adjust his face mask with his right hand. About three seconds later, he fell backward and lay still. Hamlin was surrounded by shocked players from both teams, and when he was taken off the field 16 minutes later, the Bills gathered to pray. Hamlin’s uniform was cut off, and it looked like he was getting CPR while people were helping him.

Another Topic:  Mervo High Shooting: A student from another school shot and killed Mervo High student

Hamlin was also given oxygen, ESPN said on its broadcast. He was put on a backboard and put in an ambulance. After the player got hurt, the game was stopped for 21 minutes, and the players left the field slowly. Hamlin, who is 24 years old, went to college in his home town of Pitt for five years and played in 48 games for the Panthers.

As a senior, he made the second team of All-ACC, was chosen as the team captain, and was chosen to play in the Senior Bowl. He was picked up by the Bills in the sixth round of the 2021 draft. As a rookie, he played in 14 games. This year, when Micah Hyde got hurt and had to miss the rest of the season, he took over as the starter. Hamlin, who is 6 feet tall and weighs 200 pounds, had 91 tackles, 63 of which were solo tackles, and 1 1/2 sacks before the game.

“No one’s been through this, “I’ve never seen anything like it, either,” longtime NFL quarterback Troy Aikman said on the ESPN telecast