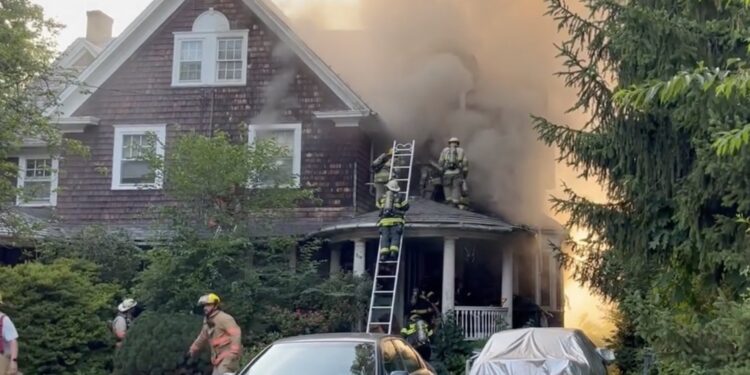 Multiple personnel’s with the Philadelphia Fire Department are on the scene of a large fire and heavy smokes in the Jenkintown Boro. According to the department, the fire is reported at a three-story building located in the 200 block of Summit St. According to responding officers, a firefighter is currently being treated of injuries sustained during the fire. A person was evacuated from the 2nd floor of the fully involved structure.

Jenkintown Boro. Montgomery Co. 200 blk of Summit St. Units on scene with heavy fire showing from a dwelling with reports of a person trapped.

Update-2nd alarm- Jenkintown Boro. 200 Summit Ave- Interior crews have located a victim inside and removed from the house. Heavy fire and hoarding conditions.

The condition of the victim evacuated from the fire is not known at this time. Multiple crews are currently working to extinguish the heavy fire at the moment.

Another Topic:  $4.4 million awarded to family of Luke Stewart killed by Euclid police officer in 2017